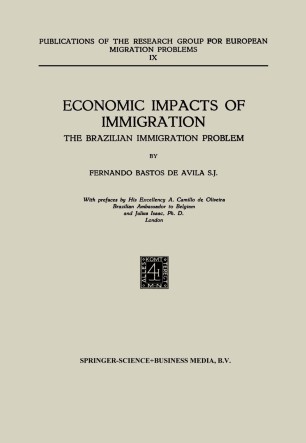 Part of the Publications of the Research Group for European Migration Problems book series (PRGEMP, volume 9)

It amounts to a truism to say that amongst the great problems left by the Second Great War very few called for national and international planning so urgently as the problem of human migrations. During and after the conflicts a mass displacement of population was brought to be ar heavilyon the demographie situation of Western Europe. On the other hand, in the turmoil of the aftermath some western countries came to lose, one by one, their Afriean and Asiatic colonies, and were in consequence deprived of an outlet for their surplus population. The economic implications of the problem were tremendous. Where to find a remedy to such a tragie situation? I would not venture to say that large scale migrations are like­ ly to bring about, all by themselves, a harmonious distribution of population. It must be recognized, nevertheless, that economists and geographers alike are ready to admit that this problem, and the problem of economic pressure whieh derives therefrom, cannot be satisfactorily settled unless a weIl devised policy of regulation is set up, in order to bring all manpower available doser to the natural resources of wealth. It follows that in the present days the migration policy of any given country has to be considered in the light of international co-operation. This planetary vision of all great human problems is a welcome sign of our times.