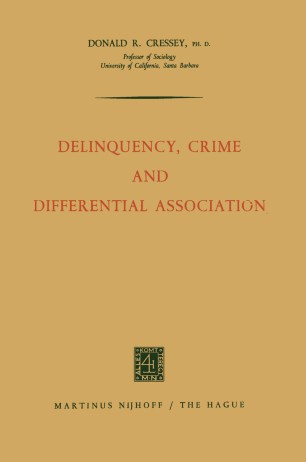 This is a book about Edwin H. Sutherland's theory of differ­ ential association. I received my Ph. D. from Indiana University, where I worked with Sutherland, and the volume is made up principally of my writings on differential association during the years 1952-1963. However, the volume is neither a festschrift nor a book of reprints. The original materials have in most cases been quite severely edited in order to give the volume coherence and in order to minimize repetition and redundancy. For example, portions of one journal article appear in Chapters I, IV and V; parts of a chapter published in a recent book appear in Chapters I, II and III; and Chapter IX is composed of two inter-related articles, published eight years apart. Chapter I has not appeared elsewhere in its present form, but most of it consists of snippets culled from several of my articles and books and woven together in new form. The book is intended primarily for non-American readers, who on the whole are not as familiar with Sutherland's theory (or with other sociological and social psychological theories about delinquency, crime and corrections) as are Americans. Yet at least a nodding acquaintance with Sutherland's work is becoming increasingly necessary to an intelligent reading of the American literature in criminology.