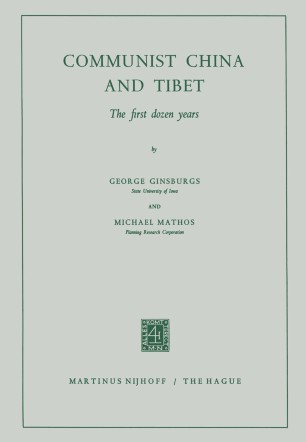 The signing in Peking on May 27, 1951, of the 17-point Agreement on Measures for the Peaceful Liberation of Tibet marked the end of Tibet's latest forty-year interlude of de facto independence and formalized an arrangement which, although in some respects differing from the earlier relationship between China and Tibet, in principle but reimposed the former's traditional suzerainty over the latter. Since then, the course and pattern of relations between the Central Government and the so-called Local Government of Tibet have undergone a series of drastic reappraisals and readjustments, culmi­ nating in the rebellion of 1959 and the flight of the Dalai Lama to India. These events, together with the recent degeneration of the Sino-Indian border dispute into a full-fledged military confrontation, have served to dramatize the importance of Tibet from the point of view of global strategy and world diplomacy. Long before that, however, indeed ever since Tibet's occupation by the Chinese Red armies and the region's effective submission to Peking's authority, the Tibetan question had already assumed the status of a major political problem and that for a variety of good reasons, internal as well as international. From the vantage-point of domestic politics, the Tibetan issue was from the very start, and still is now, of prime significance on at least three counts.