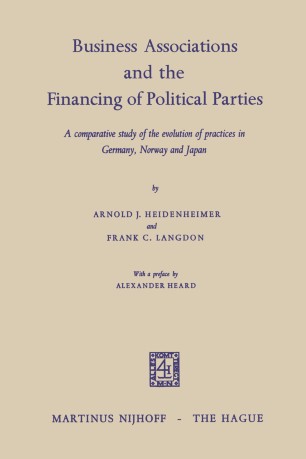 Business Associations and the Financing of Political Parties

A Comparative Study of the Evolution of Practices in Germany, Norway and Japan

Students of government and social power recognize that wherever governmental systems embrace popular elections, the functions and mechanisms of political finance constitute inevitable links of influence between economic structures and political processes. The transmu­ tation of economic power into political power has been of historic concern from ancient philosophers to modern political scientists. Efforts to discern and interpret the political roles of those engaged in funding candidates and political parties have intensified in recent years. Attention given the subject has deepened substantially in the United States since World War II and, while there have been differ­ ences in range and quality, serious analytical interests have also developed in numerous other nations around the world. These trends have been accompanied by increasingly more energetic and sophisti­ cated attempts at comparative analysis. Problems in transnational studies of political processes have always been formidable. The comparative study of political finance has been retarded by difficulties in defining units of analysis that make it possible to identify in some measurable way the effects of political fmance in precise phases of the governing process, e. g. , in the per­ suasion of voters, in party nominating processes, in executive decision­ making. Cash transactions, even when known with confidence, consti­ tute only a partial aspect of political finance. Other shades of economic power may be equally relevant, involving services or goods directly provided, credits and other economic benefits extended or withheld, and the exercise of less tangible but equally potent influence.