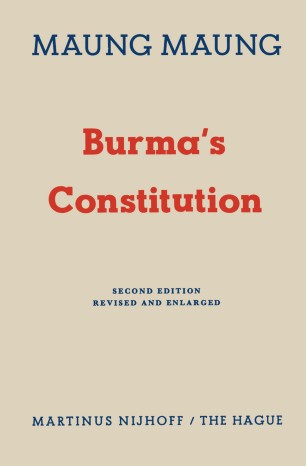 In his former work, Burma in the Family oj Nations, Dr. Maung Maung has already gained an international reputation as a student of public affairs in Burma; in this new book he earns fresh laurels. It is mainly in two parts. In Part I he traces the genesis of the Constitution and in Part II he explains it. The first part outlines the constitutional progress of Burma under British rule, the changes under Dr. Ba Maw during the Japanese occupation, and further developments until the attainment of independence by the Anti­ Fascist People's Freedom League. Nowhere else can one find such a clear and comprehensive account of the political evolution of Burma since 1931, doubly significant by the Saya San rebellion and the birth of the Thakin movement; its value is enhanced by the reproduction of three documents not otherwise readily accessible: the interim Constitution under the Japanese; the Panglong Agreement, in which the Hill Peoples undertook to co-operate in framing the Constitution for the Union of Burma; and the original draft Constitution which the AFPFL published in May 1947 for consideration by the Constituent Assembly.