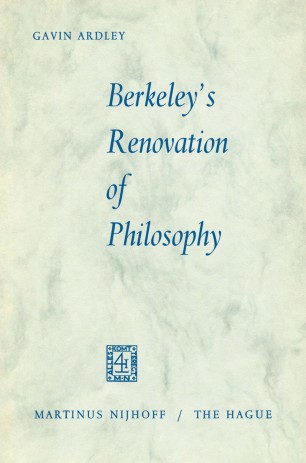 In this work I have endeavoured to see Berkeley in his contemporary setting. On the principle that philosophy is ultimately about men, not about abstract problems, I have tried to see Berkeley the philosopher as an expression of Berkeley the man. When this is done, what is perennial in the philosophy may be discerned in and through what is local and temporal. Berkeley then emerges as a pioneer reformer; not so much an innovator as a renovator; one who set out to rescue phi­ losophy from the enthusiasms of the preceding age; one who strove to seat philosophy once more on the broad human and common sense foundations laid by Plato and Aristotle. Critical studies of some of the more striking of Berkeley's epistemo­ logical arguments are legion. They commenced with the young Berke­ ley's first appearance in print, and have continued to this day. But whether they take the form of professions of support for Berkeley, or of bald refutations of Berkeley's supposed fallacies, or whether, like the contemporary "analytical" studies of Moore, Warnock, and Austin, they are subtle exposures of alleged deeply concealed logical muddles, they all tend to share one common characteristic: they select and abstract from the totality of Berkeley, and miss the robust simplicity and universality of Berkeley's intentions. It is the intentions which control the whole, and give the right perspective in which to view the various items.