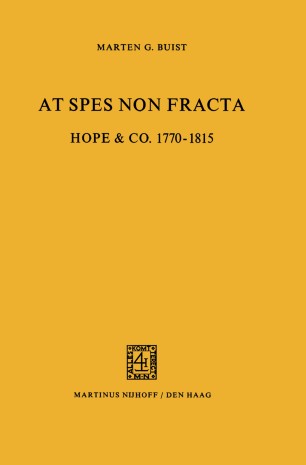 The setting for this study is reflected in the sub-title 'Merchant bankers and diplomats at work. ' The aim is to follow the partners in their many and diverse activities: in their relationship towards each other, in their contacts with other houses and in their attitudes towards government of­ ficials. Moreover, the author has attempted to show the motives for their commercial and financial actions, where these were discernible. A point of departure such as this implies that the surviving correspondence consti­ tutes the principal source of information. Quantitative data are included, but within this framework their role is subsidiary. Because this book is intended for various categories of readers, it has been divided into three parts. The introductory chapter, which contains an abridged history of Hope & Co. up to 1815, is intended for those whose interest in the subject is of a more general nature. In the same chapter, a number of main themes such as the growth of foreign loans in the Nether­ lands and the technique per se of issuing loans are discussed, and at­ tention is devoted to some of the problems of trade and to the question whether Hope & Co. should be viewed as merchants or as bankers. In conclusion, an impression is given of the part played by Amsterdam as a financial centre during the Napoleonic era and of the very exceptional po­ sition which Hope & Co. occupied at that time.