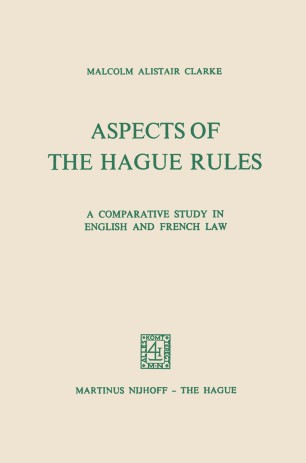 A Comparative Study in English and French Law

It has been estimated that four-fifths of an carriage of goods by sea are governed by the Hague Rules, properly known as the Convention for the Unification of Certain Rules Relating to Bills of Lading, signed at Brussels in 1924. The success of the Convention is wen recognised. Its importance is self-evident and such that, notwithstanding its success, it has been the subject of regular scrutiny with a view to improvement and reform. Attention has focussed on various matters, among them two central provisions which are the subject of this book. First to be considered is article X concerning the legal scope of the Convention: to which contracts for carriage under bills of lading does the Convention apply? This question has caused much trouble, was debated by the C. M. 1. for twenty years and was apparently settled by a new Conven­ tion signed at Brussels in 1968; but the solution may never come into force as the entire Convention is currently being considered by the United Nations with a view to reform of a different kind. The second part of the book examines one of the fundamental duties in the Convention. The ultimate duties of the carrier are duties of due diligence, diligence in caring for cargo and diligence in preparing his ship for sea. It is the latter duty that has been selected for detailed study.