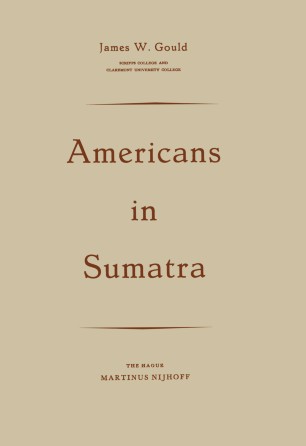 There is a common belief that until recently Americans have preferred isolation to interest in remote areas such as Southeast Asia. This thesis can be tested by examining the history of American relations with a place on the opposite side of the globe from the United States. Such a land is Sumatra. It is one of the largest islands in the world. Its I66,789 square mile area exceeds that of the third largest American state, California, and is larger than Italy. Lying halfway around the world from the United States, its I050 mile length is almost divided by the equator, which runs across it for 285 miles. Sumatra's strategic importance is two-fold. Firstly, it is the first island stepping stone from the Asiatic mainland into the Australasian archipelago. This was demonstrated in I942 when the United States stationed planes on Sumatra in an attempt to stem the Japanese advance southward. Secondly, it lies athwart the shortest sea routes from Eastern Asia to Europe and the Eastern United States. Sumatra's southern tip forms one side of the Straits of Sunda which guards the access to the Java, China and Philippine Seas. At the island's northern tip is the entrance to the Straits of Malacca, the shortest sea lane be­ tween the Near and Far East. The opening of the Suez Canal in I869 shifted the shortest route between the Far East and the Western World from the Sunda to the Malacca Straits.