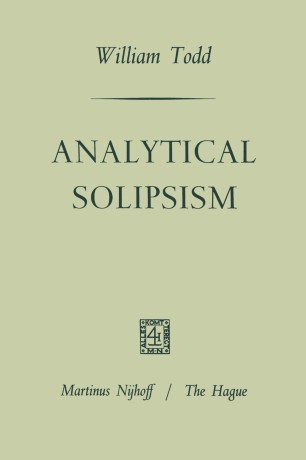 Philosophers usually have been anxious to avoid solipsism. A large number of good and great philosophers have tried to refute it. Of course, these philosophers have not always had the same target in mind and, like everything else, solipsism over the centuries has become increasingly elusive and subtle. In this book I undertake to state the position in its most modern and what I take to be its most plausible form. At some points in the history of philosophy the solipsist has been one who denied the existence of everything except himself or even the existence of everything except his own present sensations. At other times, the solipsist instead of doubting these things has merely insisted that there could be no good reason for believing in the existence of anything beyond one's own present sensations. Roughly, this doubt is aimed at reasons rather than at things. A solipsist of this sort appears in Santayana's Scepticism and Animal Faith.