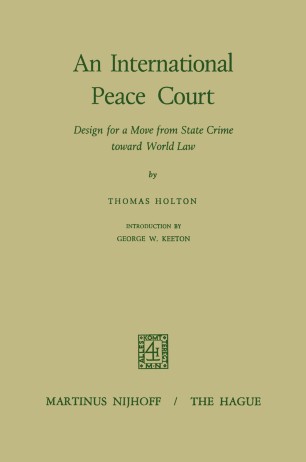 Design for a Move from State Crime Toward World Law

The classical concept ofInternationalLa w, as developed by Gentilis, Gro­ tius and their successors, accepted as its starting point the sovereignty of states, from which it followed that (r) the rules of International Law were based upon the general consent of those states; and (2) that, since state sovereignty was not capable of limitation, otherwise than by the consent of the state itself, in the last resort, International Law must accept the fact of war. Two world wars within the space of thirty years, and the development of nuclear weapons of unlimited potential, have compelled statesmen and lawyers to take a fresh look at the foundations of international relations. The First World War was followed by the creation of the League of Nations, and by the establish­ ment of the Permanent Court of International Justice. The failure of both, insofar as the preservation of peace was concerned, was apparent in the continuance of international insecurity, culminating in World War II. This again was followed by the establishment of a new inter­ national organisation, the United Nations, with its auxiliary, the International Court of Justice. Nevertheless, international security seems further away than ever, and it may be suggested that it is the devastating potential of nuclear weapons, rather than the strength of international machinery, which has so far prevented a third general conflict far more disastrous than either of the two World Wars which have already taken place.