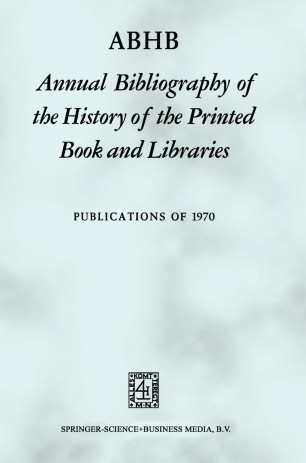 The history of printing, books, and libraries, is confined only to a limited extent within the boundaries of individual countries. There are, indeed, few historical developments which have played a more universal role, in reaction against all kinds of particularism, than type design, printing, book production, publishing, illustration, binding, librarianship, journal­ ism, and related subjects. Their history should be assessed and studied primarily in an international, not in a local, context. The bibliographical resources, however, which the historian of these sub­ jects has at his disposal correspond hardly at all to the essentially inter­ national character of the object of his studies. Since the appearance of the retrospective bibliography of BIG MORE and WYMAN, covering the subject comprehensively up to r88o, the only current bibliography has been the lnternationale Bibliographie des Buck-und Bi­ bliothekswesens. Covering a representative part of newly published liter­ ature, it appeared from rgz8, but did not survive the Second World War. More recently, several useful, but limited, bibliographies have appeared.