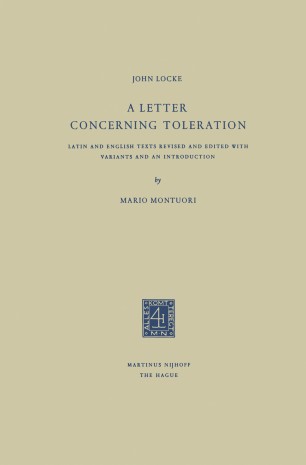 Limborch's edition and Popple's translation, as on whether it is true that Popple translated the Epistola into English 'a l'insu de Mr Locke', and consequently whether Locke was right or wrong in saying that the translation was made 'without my privity'. Long research into documents hitherto unpublished, or little known, or badly used, has persuaded me that Locke not only knew that Popple had undertaken to translate the Gouda Latin text, but also that Locke followed Popple's work very closely, and even that the second English edition of 1690 was edited by Locke himself. In these circumstances it does not seem possible to speak of an original text, that in Latin, and an English translation; rather they are two different versions of Locke's thoughts on Toleration. The accusations of unreliability levelled at Popple therefore fall to the ground, and the Latin and English texts acquire equal rights to our trust, since they both deserve the same place among Locke's works. Consequently the expression 'without my privity', which a number of people had seen as revealing an innate weakness in Locke's moral character, reacquires its precise meaning: testifying to Locke's profound modesty and integrity.