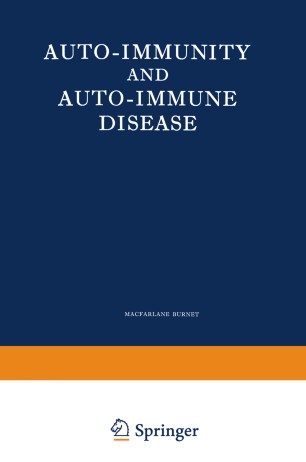 A survey for physician or biologist

In 1957 or thereabouts I became impressed with how immunity could be looked at as a process of Darwinian selection amongst the circulating lymphoid cells of the body. The clonal selection theory which grew out of this has been generally accepted in principle by immunologists, but I do not feel that its full implications in relation to pathology have yet been widely realized. In a previous book, Immunological Surveillance, I have tried to apply the approach to cancer immunity. This is a basically similar attempt to look at auto-immune disease from the same Darwinian point of view. Anyone who attempts to produce acceptable general statements about complex biological and clinical phenomena must have a certain sense of guilt. No biological phenomenon can ever be completely, or even adequately, described. There can, at best, only be a progressive improvement in the acceptability, the intellectual elegance, or the practical usefulness of the working generalizations that can be produced. Any attempt to write at this interpretative level can easily be brushed aside as superficial, unnecessary, and liable to be proved wrong or irrelevant by new developments. It is anathema to many good professional scientists and their objections are real enough.