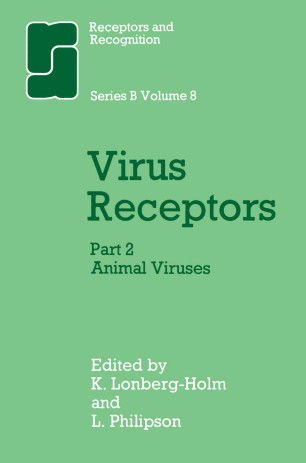 Part of the Receptors and Recognition book series (RERE, volume 7)

It is hardly necessary to define the concept of receptors to readers of this series, but it should be borne in mind that in several instances receptors are undefined entities, whose molecular details remain to be established. On the other hand the ligand, which recognizes the receptors, has been identified and characterized in most cases. The current interest in the structure and function of biological membranes gives great expectations that we may understand in the near future the details of ligand-receptor interaction. This interaction involves two defined steps: the first, usually referred to as recognition, is followed by the second step, transduction, in which the ligand-receptor interaction is translated by the cell into a biochemical action. The present two volumes which cover prokaryotic and eukaryotic virus receptors, have been published together in order to illustrate the specificity of virus­ receptor recognition which appears to be a guiding principle for both bacteria and higher cells. The identification and characterization of the receptors for phages of gram-negative bacteria has to a large extent relied on the genetic tech­ niques available for these organisms. In a similar way the availability of genetic systems has also clarified the interrelationship between animal retrovirus receptors even if the molecular structure remains to be determined. The paucity of defined genetic systems may therefore explain part of our ignorance concerning the mole­ cular details of virus receptors on human cells and possibly also on gram-positive bacteria.