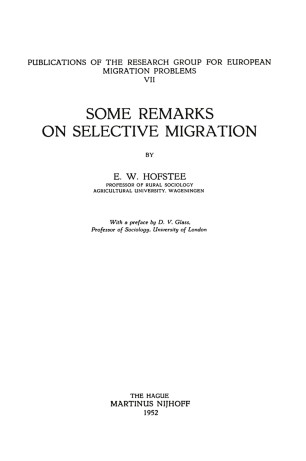 Some Remarks on Selective Migration

Part of the Publications of the Research Group for European Migration Problems book series (REMP, volume 7)

Professor Hofstee has collected together, in compact and highly readable form, some of the most important conclusions so far reached in the study of selective aspects of internal and external migration. Of still greater value, however, than this sum­ mary of findings, and more stimulating to those of us who are directly concerned with demographic research, are Professor Hofstee's comments on the undocumented hypotheses with which the literature of migration abounds, and his suggestions concern­ ing the kinds of questions to which objective answers are needed if effective progress is to be made in this branch of social studies. The study of migration has had a curiously unsatisfactory history. Statistics of migration developed as by-products of governmental policy and, even so, with scant regard to those ques­ tions on which light needed to be thrown if policy was to have a sound basis. And as, for long periods, internal movement was not considered a fit subject for policy, the statistics in that field tended to be even less useful. In many countries, net balances of movement by major administrative areas were the only indicators that could be obtained. No less important, however, as an expla­ nation of the unsatisfactory state of the subject is the fact that so much of non-governmental research has been piece-meal and un-coordinated - often of considerable interest in itself but, as is the case with sociology in general, not building up into a systematic structure.