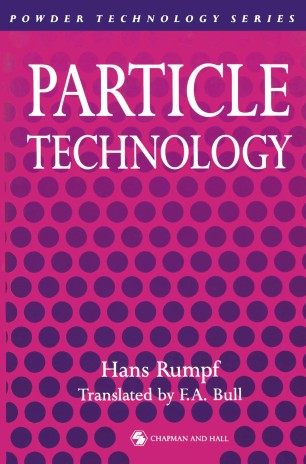 The inspiration for translating this classic text came during a sabbatical year spent at the University of Karlsruhe in 1974. Under the leadership of the late Professor Hans Rumpf, the Institut fUr Mechanische Verfahrenstechnik, Karlsruhe, from the early 1960s onwards, by extensive research and advanced teaching had promoted the discipline of mechanical process technology, a branch of process engineering which had been rather neglected, especially in many chemical engineering depart­ ments of universities in the English-speaking world. There is a need for texts of this kind, particularly for the more specialized teaching that has to be done during the later stages of engineering courses. This work, which is really a monograph, serves as a concise and compact introduction, albeit at an advanced level, to all those functions of process engineering that have to do with the handling and treatment of particulate matter and bulk solids. Much of this information has previously been scattered around journals and other books and not brought together in one work. Furthermore, Rumpf has emphasized the physical and theoretical foundations of the subject and avoided a treatment that is simply empirical.