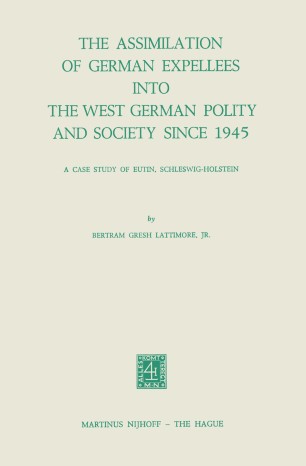 A Case Study of Eutin, Schleswig-Holstein

The expulsions of German nationals from former Reich territories east of the Oder-Neisse Rivers and of German minority communities from various Eastern European nations following the collapse of the Nazi regime in 1945 constitute one of the least appreciated consequences of the Second World War. Numbering some ten million people, this group formed nearly a fifth of the total population of the new West German state which emerged in 1949 and presented a grave threat to its early stability. The state (Land) which received the greatest number of these largely destitute expellees in proportion to its indigenous population was Schleswig­ Holstein: in the years between 1945 and 1948 its population doubled. This predominately agrarian area underwent severe strains in accommodating these newcomers, and its handling of the expellee problem provided a bench mark for the evaluation of the assimilation process throughout the Federal Republic. While the tracing of the assimilation of the expellees into the West German polity and society has been voluminously documented l at the national level, much less research into the process has been conducted at the state and local levels. The principal reason for this seems to lie in the belief that the process has been success­ fully completed at these lower levels and may be considered a 1 The classic treatment of the first decade and a half of the assimilation process from the national level is Eugen Lemberg and Friedrich Edding, eds.