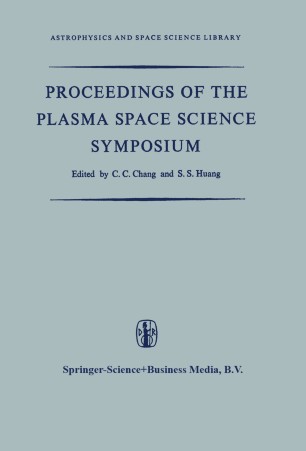 Space, whether interplanetary or interstellar, is filled with plasma or ionized gas. The success of space exploration must count heavily on the study and understanding ofthe plasma. With this view, the Symposium ofPlasma Space Science was held at The Catholic University of America in Washington, D.C., in cooperation with the National Aeronautics and Space Administration and the Goddard Space Flight Center, June 11-14, 1963. The symposium was organized by Dr. C. C. Chang as director and Dr. Y. C. Whang as assistant director. The proceedings consist of four parts. The first part describes the solar phenomena: solar magnetic field, flare, atmosphere, cosmic rays, radiation, etc. The second part deals with the solar wind or interplanetary plasma. This includes both theoretical treatment and experimental measurements of Mariner H. The third part is concen­ trated on magnetosphere, with the measurements on trapped radiation from natural sources and high altitude thermonuclear explosions, and particularly with the magnetopause. The fourth and last part includes the ring current, geomagnetic storms, the aurora, the ionosphere and lunar surface phenomena. There was round table discussion in each session. Many interesting comments and stimulating arguments emerged from the floor and are included in the Proceedings.