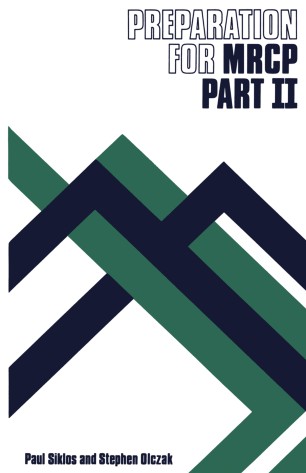 This book is directed towards post-graduates who have passed Part I of the examination for Membership of the Royal College of Physicians and are preparing for Part II. However, it is hoped that physicians at all stages of their careers will find some parts that interest them. Most of the material has appeared in the Hospital Update series, 'Preparation for MRCP', but this has been modified and expanded; many useful points arising from correspondence relating to the series have been included, and the authors would like to express their thanks to those who have written. It is not intended that this should be used as a work of reference, although there is detailed discussion of some subjects. Only the written part of the examination is dealt with in detail, but the introduction contains hints on tackling the clinical sections which the authors hope the candidates will find valuable. There is, however, no substitute for clinical practice under supervision. The questions in Vll PREFACE the written section of the examination require short answers so that marking may be easy and objective. This book contains questions similar to those that may be encountered in the examination, but the answers have been expanded as a basis for discussion. It is hoped that this will encourage the candidate to read around the subjects covered, and the authors recommend that the questions are used as a basis for group discussion, as answers other than those in the text may be considered.