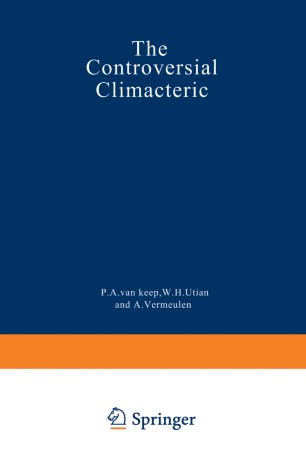 The workshop moderators’ reports presented at the Third International Congress on the Menopause, held in Ostend, Belgium, in June 1981, under the auspices of the International Menopause Society

Three International Congresses on the Menopause have been held during the last five years, evidence of the explosive increase in the scient­ ific study of this subject. The first, held in La Grande Motte, near Montpellier, France, inJune 1976, was designed to provide a consensus on menopause research (van Keep et al., 1976). The second, held in Jerusalem, was planned to assess the developing research (van Keep et al., 1979). The objective of the third congress, convened inJune 1981 in Ostend, Belgium, under the auspices of the International Menopause Society, was to explore areas of controversy in basic understanding and in the therapeutic advances relating to the climacteric. The workshop moderators were selected because of their acknow­ ledged leadership in menopause research, and each was invited to arrange a workshop on a specific area of interest or concern. The moderators, whilst being given a free hand as far as the selection of invited speakers was concerned, were asked to allow plenty of time for open discussion. In particular, they were encouraged to stimulate debate about controversial issues.