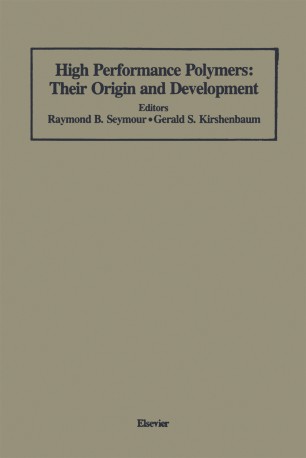 Proceedings of the Symposium on the History of High Performance Polymers at the American Chemical Society Meeting held in New York, April 15–18, 1986

According to Johann Wolfgang Von Goethe's (1740-1832) Mineralogy and Geology, "The history of science is science." A sesquicentennial later, one may state that the history of high performance polymers is the science of these important engineering polymers. Many of the inventors of these superior materials of construction have stood on the thresholds of the new and have recounted their experiences (trials, tribulations and satisfactions) in the symposium and in their chapters in this book. Those who have not accepted the historical approach in the past, should now recognize the value of the historical viewpoint for studying new developments, such as general purpose polymers and, to a greater degree, the high performance polymers. To put polymer science into its proper perspective, its worth recalling that historically, the ages of civilization have been named according to the materials that dominated that period. First there was the Stone Age eventually followed by the Tin, Bronze, Iron and Steel Ages. Today many historians consider us living in the Age of Synthetics: Polymers, Fibers, Plastics, Elastomers, Films, Coatings, Adhesives, etc. It is also interesting to note that in the early 1980's, Lord Todd, then President of the Royal Society of Chemistry was asked what has been chemistry's biggest contribution to society. He felt that despite all the marvelous medical advances, chemistry's biggest contribution was the development of polymeri­ zation. Man's knowledge of polymer science is so new that Professor Herman F.