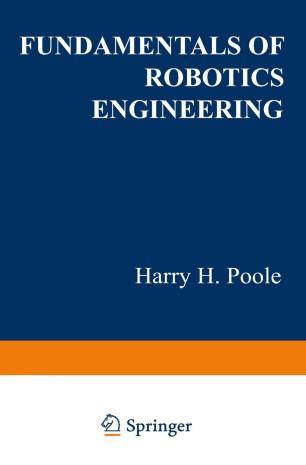 Robotics engineering has progressed from an infant industry in 1961 to one including over 500 robot and allied firms around the world in 1989. During this growth period, many robotics books have been published, so me of which have served as industry standards. Until recently, the design of robotics sys­ tems has been primarily the responsibility of the mechanical engineer, and their application in factories has been the responsibility of the manufacturing engineer. Few robotics books address the many systems issues facing electron­ ics engineers or computer programmers. The mid-1980s witnessed a major change in the robotics field. The develop­ ment of advanced sensor systems (particularly vision), improvements in the intelligence area, and the desire to integrate groups of robots working together in local work cells or in factory-wide systems have greatly increased the partic­ ipation of electronics engineers and computer programmers. Further, as ro­ bots ga in mobility, they are being used in completely new areas, such as construction, firefighting, and underwater exploration, and the need for com­ puters and smart sensors has increased. Fundamentals af Rabaties Engineering is aimed at the practicing electrical engineer or computer analyst who needs to review the fundamentals of engi­ neering as applied to robotics and to understand the impact on system design caused by constraints unique to robotics. Because there are many good texts covering mechanical engineering topics, this book is limited to an overview of those topics and the effects they have on electrical design and system pro­ grams.