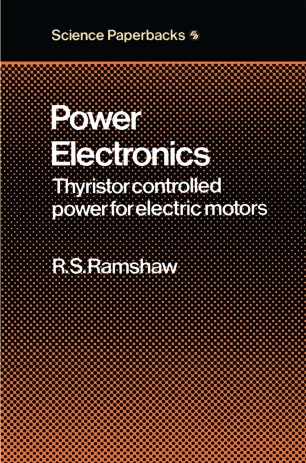 The following pages are meant for those who wish to use thyristors. The details of the physics of semiconductor materials or the design of thyristors themselves are unnecessary here but a general description of the device may help to avoid pitfalls during electric circuit design. Thyristor is the internationally recognized name for a particular semi­ conductor device. The name is derived from the Greek, the first part meaning switch and the second part an association with the transistor family. It has a trade name, viz. SCR (silicon controlled rectifier) and it got this name principally because it is a silicon device and it is used as a rectifier which can be controlled. As a controlled switch it forms a group together with the electromagnetic relay, the thyratron and the mercury arc rectifier. The advantages and disadvantages of the thyristor become apparent in the process of describing the device and its range of application. However, the present general interest, development and use of the thyristor, indicates that for many cases its many advantages make it superior to other devices. Control of rotating electric machines is a major interest of the author so that in this book the applications of the thyristor are towards this end. Thyristors are used so much in connection with the control of machines that it is worthwhile to go into some details of both the electric drive to be controlled and the possible thyristor control units.