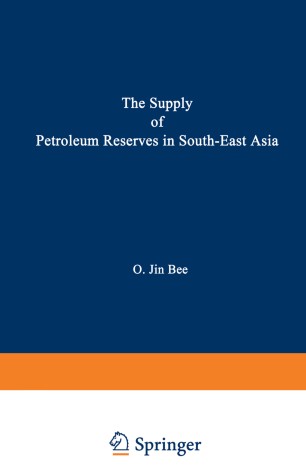 The Supply of Petroleum Reserves in South-East Asia

which may be termed 'political. risks'-may be important deter­ minants of investment. After taking such risks into consideration in the exploration and development stage, a firm computing the pres­ ent value of its probable income stream must consider several other factors. In addition to the current rate of production, it must con­ sider these: (I) engineering limits to the rate of extraction in any given period, (2) physical limits to the total amount of the resource that can be produced within a given location, and (3) limits to the availability of new petroleum sources at the same costs as at the present location. It might be useful at this point to note that the firm as an explo­ ration agent in South-East Asia operates largely as a contractor to the host government who has ownership and final control over the petroleum resources. The group of suppliers of petroleum reserves in the region is characterized by the presence of the major com­ panies, directly or through subsidiaries, as well as by many small­ er, and even independent, companies. Three major companies currently dominate exploration and producing operations in two countries-Exxon and Shell in Malaysia, Shell in Brunei. In Indonesia, Caltex and Stanvac dominate production. Outside Malaysia and Brunei the bulk of new exploration is conducted by relatively smaller companies side-by-side with the major companies like Exxon, Gulf, Mobil, Shell, and Texaco.