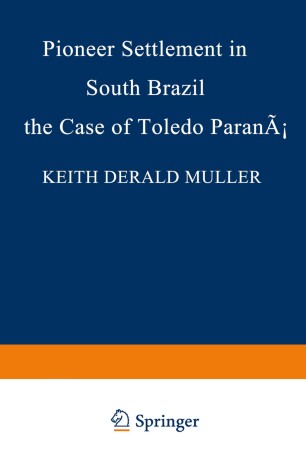 Pioneer Settlement in South Brazil: The Case of Toledo, Paraná

Part of the Publications of the Research Group for European Migration Problems book series (REMP, volume 19)

In the period since the end of world War II numerous develop­ ing countries have employed colonization, or planned pioneer settlement, as one method of building a more reliable and bal­ anced economy. It is felt that the traditional, single-sided sys­ tems of farm ownership and production with their latifundium and minifundium holdings will gradually and peacefully become less prominent as better settlement systems are introduced and extended. Marked increases in population pressure, large tracts of unused or underused land, and modern improvements in set­ tlement planning are among other compelling reasons for star­ ting colonization programs. Of all the areas in the world, the continent of South America probably has the widest variety of planned pioneer settlements as well as the most sizeable programs. Brazil, the largest country on the continent, is actively engaged in populating the vast, emp­ ty spaces of its interior, and provides excellent opportunities for the scholarly investigation of new frontier settlement types. In addition to the academic discussion of the origin and develop­ ment of these expressions of man's expansion into marginal ar­ eas, the critical examination of relatively new attempts at land settlement is a useful thing because what is to be learned from such studies may be directly applicable to other pioneer zones and, moreover, may be of vital significance to overall economic improvement on the continent. In this monograph, my student, K. Muller, analyzes the South Brazilian frontier colony of Toledo, Parana, founded in 1946.