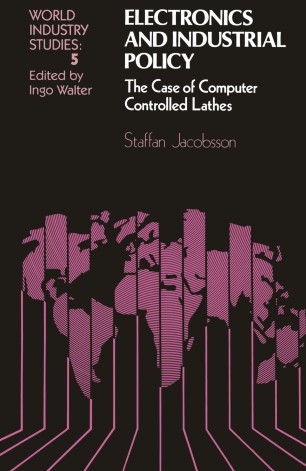 The case of computer controlled lathes

There is a rapidly expanding literature on the economics of the so­ called 'new technologies' - especially on those using microelectronic systems. Dr. Jacobsson's book deals with microelectronics-based innovation in machine tools: with the production and use of computer numerically controlled machine tools in the world economy and especially in the Third World. Jacobsson is mainly interested in the implications which CNC machine tools may be expected to have for users and producers in the Newly Industrialising Countries. He approaches this as a problem in applied economics and the book will have a primary interest for those economists whose concern is with the problems of industrialisation in developing countries. It will be parti­ cularly valuable to those who are preoccupied with the role of local capital goods manufacture and with the technological preconditions for this kind of production. Jacobsson is able to give detailed and specific arguments on these matters as far as CNC machine tools are concerned. In my view, the book has a considerably wider interest and relevance than its specification may at first sight suggest. Jacobsson's achieve­ ment is not just that he has provided valuable and convincing quantita­ tive arguments about policy in setting up production of CNC machine tools. In addition, he has set a new and much needed methodological standard for analysis of the impacts of 'new technologies' on the international economy.