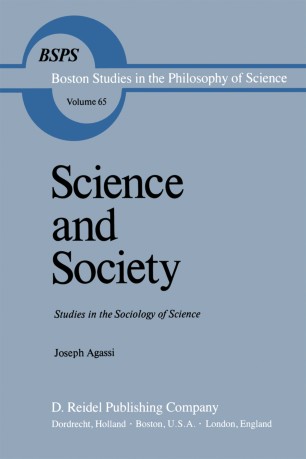 Studies in the Sociology of Science

Part of the Boston Studies in the Philosophy of Science book series (BSPS, volume 65)

"If a science has to be supported by fraudulent means, let it perish. " With these words of Kepler, Agassi plunges into the actual troubles and glories of science (321). The SOciology of science is no foreign intruder upon scientific knowledge in these essays, for we see clearly how Agassi transforms the tired internalistJexternalist debate about the causal influences in the history of science. The social character of the entire intertwined epistemological and practical natures of the sciences is intrinsic to science and itself split: the internal sociology within science, the external sociology of the social setting without. Agassi sees these social matters in the small as well as the large: from the details of scientific communication, changing publishing as he thinks to 'on-demand' centralism with less waste (Ch. 12), to the colossal tension of romanticism and rationality in the sweep of historical cultures. Agassi is a moral and political philosopher of science, defending, dis­ turbing, comprehending, criticizing. For him, science in a society requires confrontation, again and again, with issues of autonomy vs. legitimation as the central problem of democracy. And furthermore, devotion to science, pace Popper, Polanyi, and Weber, carries preoccupational dangers: Popper's elitist rooting out of 'pseudo-science', Weber's hard-working obsessive . com­ mitment to science. See Agassi's Weberian gloss on the social psychology of science in his provocative 'picture of the scientist as maniac' (437).