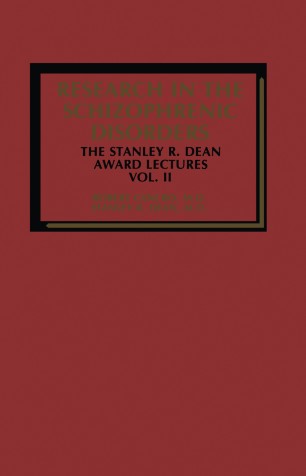 Research in the Schizophrenic Disorders

In the autumn of 1957, Stanley R. Dean proposed the creation of a founda­ tion on schizophrenia to a group of friends. The purpose was to bring the illness of schizophrenia before the public's attention and out of the shameful anonymity in which it was buried. Stanley Dean recognized the major public health importance of this illness and was determined to have an impact on it during his lifetime. By December of that year, the decision was made to create an organization called Research in Schizophrenia Endowment (RISE). Within less than two months articles of incorporation for RISE were issued by the State of Connecticut. By the latter part of March 1958, Dean was successful in getting Congress to provide $1,300,000 for research into schizophrenia. This was the first time that Congress had targeted funds specifically for research on this disorder. Within a year, by April 1959, Dr. Dean was instrumental in getting Congress to increase its appro­ priation to the NIMH by more than $8,000,000 with the specific instruction that approximately one-half of the total research funds of the NIMH be used for projects relating to schizophrenia. In the spring of 1960, RISE relinquished its corporate charter and became an integral part of the Research Foundation of the National Association for Mental Health. This merger occurred before RISE had implemented its planned annual award program for outstanding research in schizophrenia. Several members of the Board of Directors of RISE, under the leadership of Dr. James G.