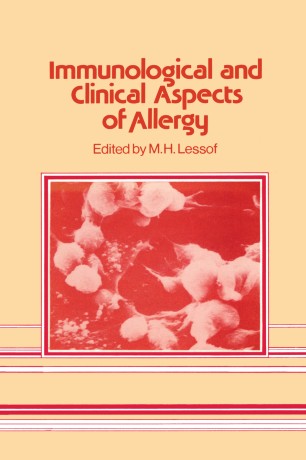 Immunological and Clinical Aspects of Allergy

In the scientific aspects of immunology, the pace of advance has been almost overwhelming, but with some notable exceptions, clinical benefits have been slow. For those who are interested in allergy, the situation has been somewhat different. Here, the scientific aspects have lagged sadly behind other branches of immunology. There has, however, been a recent explosion of knowledge, which began with the discovery of immunoglobulin E, and a curious situation has come to light. The speculations of the older allergists, which had often been derided as mere inventions, now appear to be largely true. A number of 'preposterous' hypotheses have acquired the respectability that comes with scientific proof and the entire field is now full of excitement and challenge. It is no longer doubted that 'reaginic' antibody can sensitize cells that reside beneath the surface of the skin or mucous membranes. Skin prick tests with 'hair of the tail of the dog' have been legitimized by correlating them with the carefully validated results of radioallergosorbent tests. It has furthermore been shown beyond doubt that immunotherapy with increasing amounts of bee venom really can 'hyposensitize' patients who have previously suffered anaphylactic reactions to bee stings. This book has been published in the hope that, in the field of allergy, it will bridge the gap between basic science and the clinical application.