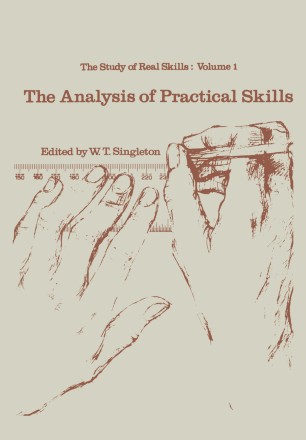 The analysis of practical skills

Part of the The study of Real Skills book series (CHBMS)

The origins of this book are in my first attempts to understand psychology as a post-war student in the Cambridge of the late 1940s. Sir Frederic Bartlett and his colleagues in the Psychology Department were talking and writing about the concept of the skill as the fundamental unit of behaviour. This made entire sense to me but not apparently to very many other people because the movement dwindled rapidly with the retirement of Sir Frederic in 1952. It got lost within performance studies which were essentially behaviouristic and stimulus-response in origin, a quite different style of thinking from the gestalt approach of skill psychology. This is not a simple dichotomy of course and skill psychology does go some way towards the analytic approach in accepting that a science needs to have a basic element, a unit from which the complexities of real behaviour can be constructed. into which it can be analysed and in terms of which it can be described and understood. The trick is to pick the right unit and I think that skills is an appropriate unit for human behaviour. Note the plural, although these units are elements they are not identical any more than the ninety-odd elements of the physical world are identical. The issue is sometimes clarified by considering the analogy with the attempt to describe a house. The simplest observable elements here are the brick. the piece of stone or the piece of wood.