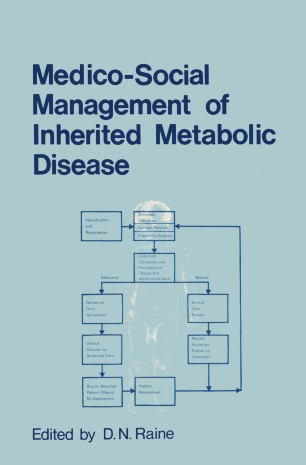 The study of inherited metabolic disease became a subject of more than academic interest in 1953 when Bickel, Gerrard and Hickmans dis­ covered that the totally disabling consequences of phenylketonuria could be prevented if treatment was instituted in the first months of life. This required the widespread screening of all newborn babies and 7 years later this had been successfully achieved in the United King­ dom. The next 10 years was a period of consolidation: screening methods were improved and extended to include other disorders; treatment of phenylketonuria was vastly improved with the stimulus of the increasing numbers of patients being detected, and research into new forms of therapy for some of the other disorders being detected has been initiated. The success of this scheme is illustrated by the remarkable achievement reported by the Phenylketonuria Registry referred to in the present volume. But at what cost has this progress been made? It is unnecessary to discuss the financial cost for many of the developments would not have been started if their economic value in the system of health care had not been unequivocally established.