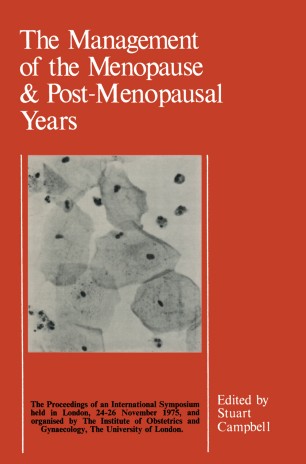 The Management of the Menopause & Post-Menopausal Years

The Proceedings of the International Symposium held in London 24–26 November 1975 Arranged by the Institute of Obstetrics and Gynaecology, The University of London

Despite the fact that the average woman spends one third of her life after the menopause, medical research has been devoted almost entirely to the repro­ ductive period of her life span. This is perhaps not surprising in our youth­ orientated society and yet there is increasing evidence that properly applied and supervised hormonal therapy could alleviate many of the severe physical symptoms which are associated with the ovarian menopause and that in the long term other aspects of physical deterioration could be modified. This lack of scientific research has made it difficult to assess which symptoms are due to the altered hormonal status of the post-menopausal period and which are due to the normal process of ageing, or the various psychological pressures which build up around most women in the fourth and fifth decades of life. In America doctors have been treating the 'menopausal syndrome' with estrogens for over 30 years, but in the United Kingdom gynaecologists and family doctors have been reticent to prescribe these steroid preparations. As a consequence, they have been labelled reactionary by the media and while there may be some truth -in this, it should be remembered that the hazar. ds associated with synthetic estrogens in the contraceptive pill were first brought to light by British epidemiological surveys.