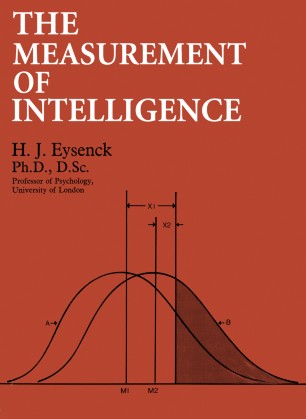 The Measurement of Intelligence

This book deals with one aspect of the modern, proof, and the deductions to which they give rise, and scientific study of intelligence, namely its measurement. the social aspect, which is concerned with the "good" or The term, measurement, has difficulties attached to it "evil" consequences which follow from the scientific which rival those attached to the term, intelligence; discovery or invention. Thus IQ testing would appear to many psychologists have little idea of what the word many people to give rise to desirable and "good" conse­ means, and what are the requirements which must be quences when it enables us to pick out bright "dis­ fulfilled in order to enable "measurement" to take advantaged" children for higher educational and place. Krantz, Luce, Suppes and Tversky (1971) have university training who would otherwise not have been tried to provide us with an introduction to the "Founda­ educated up to the level of their ability. On the other tions of Measurement"; these two volumes outline the hand, IQ testing would appear to many people to give background against which attempts to measure intelli­ rise to undesirable and "bad" consequences when it gence must be evaluated. * No short excerpt or set of enables trade unions to exclude coloured workers by the readings could suffice to bring home to the "innum­ imposition of unrealistic and irrelevant intellectual erate" reader the implications of scientific measurement, requirements for membership.