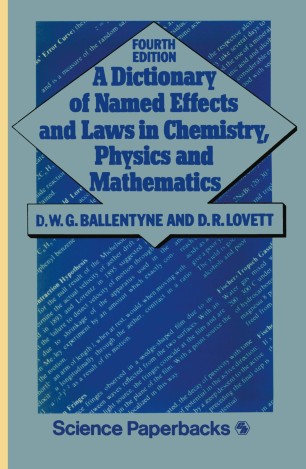 A Dictionary of Named Effects and Laws in Chemistry, Physics and Mathematics

The format of this edition remains unchanged from previous editions but the majority of entries have received some revision. In particular, units are now in SI units wherever possible, although with certain of the classical entries this is not possible. Chemical terminology has proved a particular problem. We have kept the common names for organic compounds because of the wide readership of this book but we have added an extra table giving the equivalent systematic names and the formulae. We have tried to avoid omission of any named effects and laws that have wide usage. Nevertheless, in order to keep the book to a manageable length, it has been necessary to make a selection among the less commonly used terms and it is inevitable that some arbitrary choices and omissions must be made. Some entries from earlier editions have been left out to make room for other entries which we feel have become more important. We are especially grateful to those readers who have pointed out previous omissions. D.W.G.B. Imperial College, Uni!.:ersity of London D.R.L.