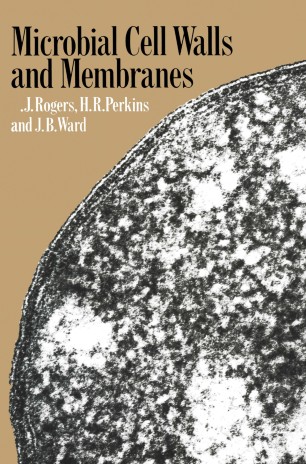 In 1968 when Cell Walls and Membranes was published it was still reasonable to attempt to write a book covering the whole subject. Accordingly this edition of the book had something to say about walls from micro-organisms and plants as well as about membranes from bacteria and animal cells. A decade later this is manifestly impossible. Knowledge about almost all the subjects has grown explosively, par­ ticularly about membranes and the biosynthesis of macromolecules. Moreover aspects of the subject that were still in a relatively primitive state ten years ago have grown into highly sophisticated subjects worthy of extended treatment. The result is that the present book has had to be confined to structures and functions relating to only one division of the biological kingdom, namely micro-organisms. Even then severe limitations have had to be made to keep the task within the time available to the authors and their expertise. A few of the titles of chapters such as those on the isolation of walls and membranes, the structure of the components of bacterial and micro-fungal walls and their biosynthesis remain from the earlier book. These chapters have been almost completely rewritten and a number of quite new chapters added on topics such as the action of the antibiotics that inhibit bacterial wall syn­ thesis, on the function of bacterial membranes, and the bacterial autolysins.