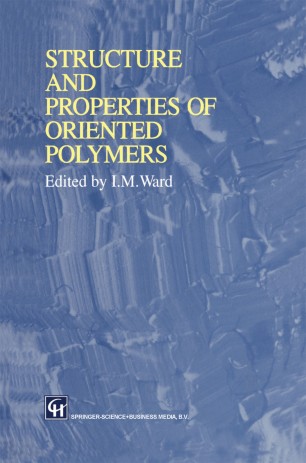 Structure and Properties of Oriented Polymers

The first edition was produced at a time when the advantages of studying oriented polymers were just becoming apparent. From a sci­ entific stand point it had been demonstrated that greater insight into both structure and properties could be obtained if an oriented polymer was prepared. From a technological viewpoint, major advances were under­ way, especially in high modulus and high strength fibres. Twenty years later, it is possible to review the scientific advances which have been made in this area and to provide much wider perspectives for the technology. As in the case of the first edition, the emphasis is on the methodologies available for characterizing oriented polymers and their mechanical behaviour. It is a particular pleasure to thank the contributing authors for their cooperation and Dr Philip Hastings of Chapman & Hall for his support and encouragement. I am also indebted to Professors A. H. Windle and D. C. Bassett for their respective contributions to sections 1. 3. 1 and 1. 3. 4. Although this chapter has been extensively revised, the contribution of the late Leslie Holliday to the first edition of this book is also acknowledged. Introduction 1 I. M. Ward 1. 1 THE PHENOMENON OF ORIENTATION Orientation in polymers is a phenomenon of great technical and theo­ retical importance. The word orientation itself conveys a number of ideas.