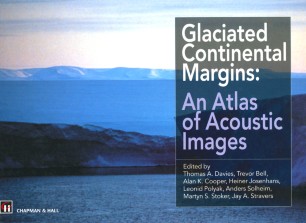 An Atlas of Acoustic Images

Late Cenozoic glaciation directly affected sedimentation on more than half the Earth's continental shelves. Ice continues to be a dominant influence on sedimentation around Greenland and Antarctica, and on the shelves facing the Arctic Ocean. The features of these shelves include true glacimarine features, i.e. those found in a marine environment in proximityto, or strongly under the influence of, ice, such as iceberg scours and pits, ice gouges and incisions, subglacial outwash deposits, and diamictons resulting from ice rafting. Also seen, because large areas of the shelves were exposed during the Pleistocene lowering of sea level, are terrestrial glacial and periglacial features, e.g. fluvial outwash valleys and associated deposits, tunnel valleys, drumlin fields and lodgement till, which have subsequently been submerged and modified by marine influences.
Glaciated Continental Margins: An Atlas of Acoustic Images illustrates the complexity of features found in glaciated and formerly glaciated marine environments. The volume was assembled by an international Editorial Committee, led by Thomas A. Davies (University of Texas), from records gathered in the course of recent research and contributed by members of the scientific community from around the world. These include seismic sections, side-scan maps, and 3-D seismic data, supplemented in some cases by bottom photographs and core data, with accompanying text. The work is scientists at 40 institutions in 10 countries is represented.
This book will be an invaluable resource for students, Quaternary scientists, glaciologists, marine geologists and geophysicists, geotechnical engineers, and surveyors teachers working in universities, research institutions and government agencies with interests in polar and subpolar regions, as well as those in industries with offshore interests.