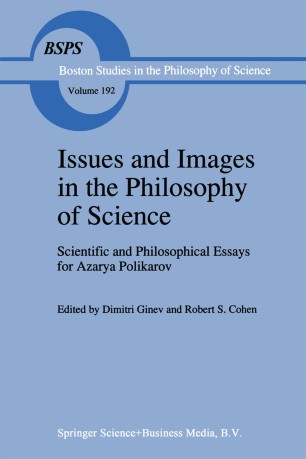 Issues and Images in the Philosophy of Science

Scientific and Philosophical Essays in Honour of Azarya Polikarov

Part of the Boston Studies in the Philosophy of Science book series (BSPS, volume 192)

Azarya Polikarov was born in Sofia on October 9, 1921. Through the many stages of politics, economy, and culture in Bulgaria, he maintained his rational humanity and scientific curiosity. He has been a splendid teacher and an accomplished critical philosopher exploring the conceptual and historical vicis­ situdes of physics in modern times and also the science policies that favor or threaten human life in these decades. Equally and easily at home both within the Eastern and Central European countries and within the Western world. Polikarov is known as a collaborating genial colleague, a working scholar. not at all a visiting academic tourist. He understands the philosophy of science from within, in all its developments, from the classical beginnings through the great ages of Galilean, Newtonian. Maxwellian science. to the times of the stunning discoveries and imaginative theories of his beloved Einstein and Bohr of the twentieth century. Moreover, his understanding has come along with a deep knowledge of the scientific topics in themselves. Looking at our Appendix listing his principal publications, we see that Polikarov's public research career, after years of science teaching and popular science writing, began in the fifties in Bulgarian, Russian and German journals.