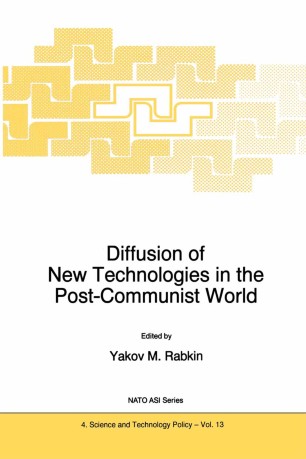 Diffusion of New Technologies in the Post-Communist World

The end of this century has witnessed dramatic changes in morality, history and geography. These changes were felt throughout the world, and also across the entire gamut of professional concerns. Even relatively remote and seemingly insulated activities such as science and technology have experienced, and up to a point contributed to, these dramatic changes. This volume presents a series of views on the effect of these changes on science and technology, and more specifically, on the international diffusion of new technologies. These views come from a variety of fields, among them history and sociology of science, political science, information sciences, marketing. Yet, most authors share an interest in science policy studies which permeates this collection. It would be fair to say that this volume belongs to the intellectual domain known as STS, i. e. studies in Science, Technology and Society. The authors come from nine countries, and their contributions are expected to reflect this diversity. It is well known that the dominant lingua franca in the end of the 20th century is Broken English, with the possible exception of a minority of native English speakers some of whom fail to learn this new language. An attempt was therefore made throughout this volume to conform to a certain standard of English usage and, at the same time, to preserve the local flavour of expression, and the stylistic and cultural dimensions of each chapter.