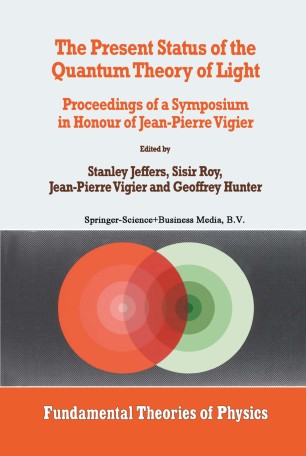 The Present Status of the Quantum Theory of Light

Proceedings of a Symposium in Honour of Jean-Pierre Vigier

THE PRESENT STATUS OF THE QUANTUM THEORY OF LIGHT In August of 1995, a group of over 70 physicists met at York University for a three-day symposium in honour of Professor Jean-Pierre Vigier. The attendance included theoretical and experimental physicists, mathematicians, astronomers and colleagues concerned with issues in the philosophy of science. The symposium was entitled "The Present Status of the Quantum Theory of Light" in accordance with Professor Vigier's wishes but in fact encompassed many of the areas to which Professor Vigier has contributed over his long and distinguished career. These include stochastic interpretations of quantum mechanics, particle physics, and electromagnetic theory. The papers presented at the symposium have been arranged in this proceedings in the following approximate order: ideas about the nature of light and photons, electrodynamiCS, the formulation and interpretation of quantum mechanics, and aspects of relativity theory. Some of the papers presented deal with alternate interpretations of quantum phenomena in the tradition of Vigier, Bohm et al. These interpretations reject the account given in purely probabilistic terms and which deems individual quantum events to be acausal and not amenable to any analysis in space-time terms. As is well known, Einstein and others also rejected the purely statistical account of quantum mechanics. As stressed by Professor Vigier at the symposium, the current experimental situation now allows for the first time for individual quantum events to be studied, e. g.