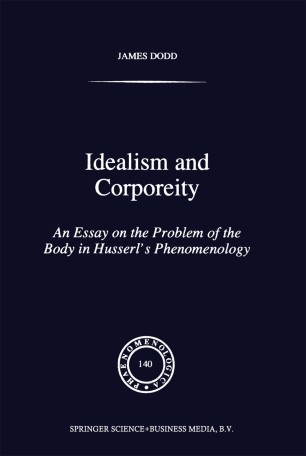 In a way, the problem of the body in Husserl' s writings is relatively straightfo r­ ward: it is an exercise in faithful description and elaboration of a sense or mean­ ing, that of the "lived body," using the tools and methods of intentional analysis. What is to be described is nothing exotic, but a recognizable, familiar element of experience; further, it is not something limited to any special type of experience, but is ever-present, whether it is in the background or the center of attention. Thus the lived body is, in a way, the most mundane of topics in phenomenology, to be du1y noted as a matter of course--of course we should include the body in the analysis of lived space; of course the body is an element in the consciousness of other persons. Along with the obviousness of the task is the impression that, at least at the outset, the problem of the body does not appear to tax the resources of intentional analysis, forcing us to raise critical questions about the scope and limits of phenomenological philosophy. There is nothing extreme about the problem of the body-it demands neither that we discern structures of the end­ most interior of consciousness, as does the study of "internal time conscious­ ness," nor does it calion us to fix the sense of the normativity that constitutes the "logic" of the world by grounding it in an absolute foundation.