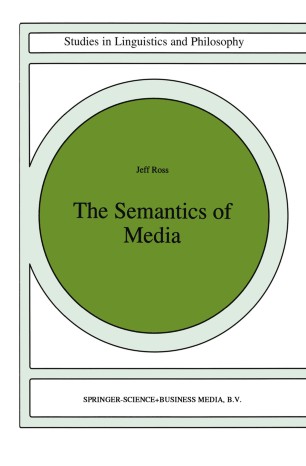 The Semantics of Media

Part of the Studies in Linguistics and Philosophy book series (SLAP, volume 64)

Media are objects with content and character that we describe using in- phrases: in the story, in the picture, in the movie, in the dream... Like the propositional attitudes, these objects present a variety of hard problems for semantic and philosophical analysis. The Semantics of Media is an organized exploration of fundamental questions in the semantics of media.
The first three chapters set out a straightforward model within the possible-worlds framework, and consider how it might account for a range of notions applying to media generally: implicit vs. explicit content, propositional vs. individual content, causal vs. intentional content and the idea of a single World of the Medium.
The final three chapters examine ways of elaborating the model to cover a range of phenomena keyed to the functionality of particular forms of media. Chapter Four is a discussion of fiction and our apparent reference to fictional characters. Chapter Five deals with the phenomenon of viewpoint in pictorial media. Chapter Six is a study of interactions between users and characters of media centering on the puzzling case of seeing in films.
The Semantics of Media will be of interest to specialists in the fields of linguistics, philosophy and communications.