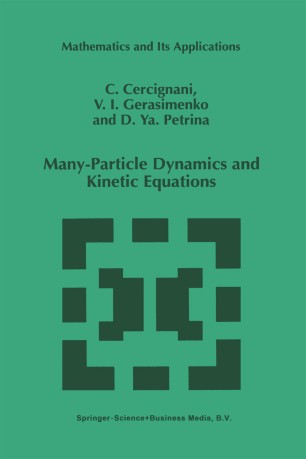 Part of the Mathematics and Its Applications book series (MAIA, volume 420)

As our title suggests, there are two aspects in the subject of this book. The first is the mathematical investigation of the dynamics of infinite systems of in­ teracting particles and the description of the time evolution of their states. The second is the rigorous derivation of kinetic equations starting from the results of the aforementioned investigation. As is well known, statistical mechanics started in the last century with some papers written by Maxwell and Boltzmann. Although some of their statements seemed statistically obvious, we must prove that they do not contradict what me­ chanics predicts. In some cases, in particular for equilibrium states, it turns out that mechanics easily provides the required justification. However things are not so easy, if we take a step forward and consider a gas is not in equilibrium, as is, e.g., the case for air around a flying vehicle. Questions of this kind have been asked since the dawn of the kinetic theory of gases, especially when certain results appeared to lead to paradoxical conclu­ sions. Today this matter is rather well understood and a rigorous kinetic theory is emerging. The importance of these developments stems not only from the need of providing a careful foundation of such a basic physical theory, but also to exhibit a prototype of a mathematical construct central to the theory of non-equilibrium phenomena of macroscopic size.