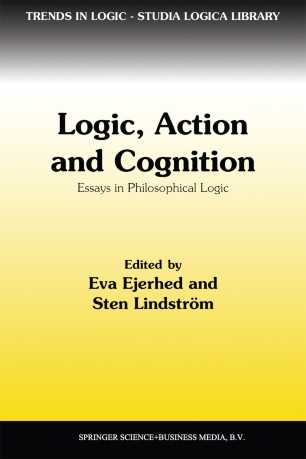 Part of the Trends in Logic book series (TREN, volume 2)

The present volume has its origin in a meeting of philosophers, linguists and cognitive scientists that was held at Umea University, Sweden, September 24-26, 1993. The meeting was organized by the Department of Philosophy in cooperation with the Department of Linguistics, and it was called UmLLI-93, the Umea Colloquium on Dynamic Approaches in Logic, Language and Information. The papers published here are considerably expanded and revised versions of talks presented by invited speakers at this colloquium. The papers included here fall into three broad categories. In the first part of the book, Action, we have collected papers that concern the formal theory of action, the logic of nonns, and the theory of rational decision. The papers in the second part, Belief Change, concern the theory of belief dynamics in the tradition of Alchourr6n, Gardenfors and Makinson. The third part, Cognition, concerns abstract questions about knowledge and truth as well'as more concrete questions about the usefuleness and tractability of various graphic representations of infonnation. An additional and important topic of the colloquium concerned logical approaches to natural language. For the sake of the thematic unity of this book, and its appearance in the series Trends in logic, the colloquium papers related to language are not included here, but some of these contributions will appear in the philosophical journal Theoria.