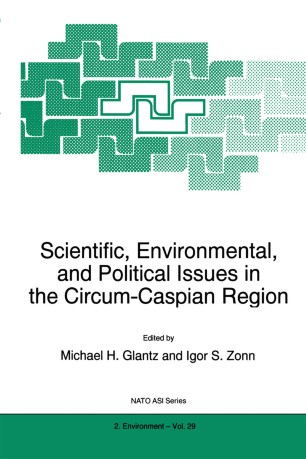 Scientific, Environmental, and Political Issues in the Circum-Caspian Region

On behalf of the Russian Federation Committee on Water Economy, I would like to welcome the participants of the NATO-sponsored Workshop on the Problems of the Caspian Sea and the Circum-Caspian States. The world's largest intercontinental sea/lake is well known for its wealth mineral and fuel resources and sturgeon stocks' the products of which (oil and caviar) are in constant demand on the world market. During the last half-century the Caspian Sea has been the focus of the scientific community concerned with its level fluctuations. We were, and still are, solving a two-faceted issue: to rescue the Caspian Sea and to rescue the population from the Caspian Sea. To rescue the Caspian Sea is to address a broad spectrum of environmental issues related primarily to water pollution by waste water and petroleum products. To rescue the population from the Caspian Sea means that an almost 2.5 m sea level rise in the last two decades has resulted in flooding of vast coastal areas deteriorating economic and social spheres of activity. Solutions to these issues are linked to the numerous mysterious aspects of recent Caspian Sea behavior. Regrettably, the collapse of the USSR has led to a decline of marine observations and control over the use of marine resources in the region. Coordinated international action on the protection of living marine resources have terminated, generating disastrous consequences.