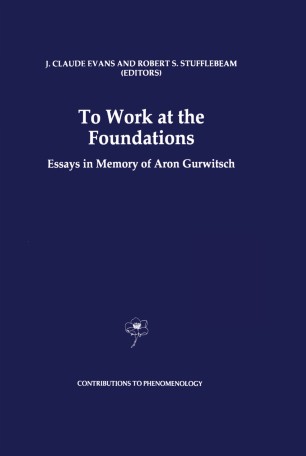 To Work at the Foundations

Essays in Memory of Aron Gurwitsch

Part of the Contributions to Phenomenology book series (CTPH, volume 25)

Aron Gurwitsch (1900-73) was one of the most important figures in the phenomenological movement between the 1920s and the 1970s. Through his introduction of Gestalt theoretical concepts into phenomenology, he exerted a powerful influence on Maurice Merleau-Ponty and others. The contributions to this memorial volume, most written by friends and students of Gurwitsch, contain critical studies of the work of Aron Gurwitsch and attempts to extend his philosophical analyses to new problems and fields. Ranging from formal ontology through the philosophy of the social sciences to the interpretation of Kant, the essays assembled here are both a tribute to and a continuation of the philosophical legacy of Aron Gurwitsch. The contributions will be of interest to advanced undergraduates and graduate students, and to specialists in a wide range of areas.