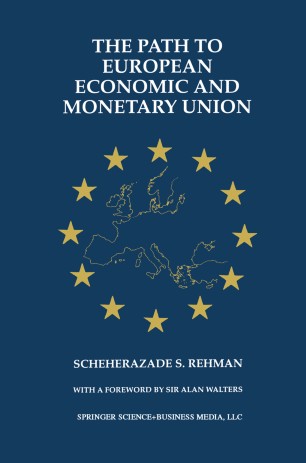 The Path to European Economic and Monetary Union

Sir Alan Walters ex-chief economic advisor to PM Margaret Thatcher Whether it succeeds or fails, Europe is everyone's concern. The idea of a united Europe has been entertained, even partially at least, achieved, inter alia, CharlemagI!e, Napoleon, Hitler, and in our da)' by Spaak, Monet and Chancellor Kohl: the first three by military conquest, the last three by "negotiation" and the creation of integrating institutional arrangements. The motives varied from the twisted paranoia of the Nazis to the idealism of SpaaklMonet/Kohl in avoiding conflicts and wars. Under the protection of NATO the European Coal and Steel Community soon was transformed into the EEC by the 1957 Treaty of Rome. The massive reduction of trade barriers, particularly between France and Germany, was rewarded by vigorous growth over the next 15 years. Even as late as 1972, when Britain acceeded to the Treaty of Rome, the EEC was thought to be lar~ely a customs union: in de Gaulle eyes the EEC was simply a collection of sovereISJ:l states who cooperated primarily on trade. Each state however enjoyed a veto; deCIsions had to be unanimous.

`Rehman's book is therefore highly recommended to students of economics, politics and IPE. It provides the detailed information one should have to discuss seriously the risks and virtues of EMU.'
Hartmut Mayer, St. Peter's College, University of Oxford, UK
Buy options