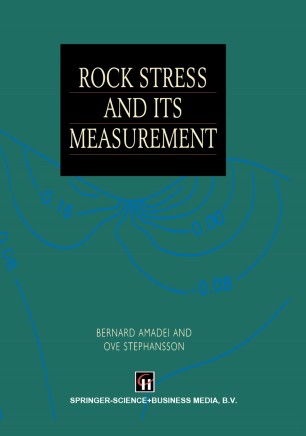 Rock Stress and Its Measurement

Rock masses are initially stressed in their current in situ state of stress and to a lesser natural state. Whether one is interested in the extent on the monitoring of stress change. formation of geological structures (folds, faults, The subject of paleostresses is only briefly intrusions, etc. ), the stability of artificial struc­ discussed. tures (tunnels, caverns, mines, surface excava­ The last 30 years have seen a major advance our knowledge and understanding of rock tions, etc. ), or the stability of boreholes, a in the in situ or virgin stress field, stress. A large body of data is now available on knowledge of along with other rock mass properties, is the state of stress in the near surface of the needed in order to predict the response of rock Earth's crust (upper 3-4km of the crust). masses to the disturbance associated with those Various theories have been proposed regarding structures. Stress in rock is usually described the origin of in situ stresses and how gravity, within the context of continuum mechanics. It is tectonics, erosion, lateral straining, rock fabric, defined at a point and is represented by a glaciation and deglaciation, topography, curva­ second-order Cartesian tensor with six compo­ ture of the Earth and other active geological nents. Because of its definition, rock stress is an features and processes contribute to the current enigmatic and fictitious quantity creating chal­ in situ stress field.