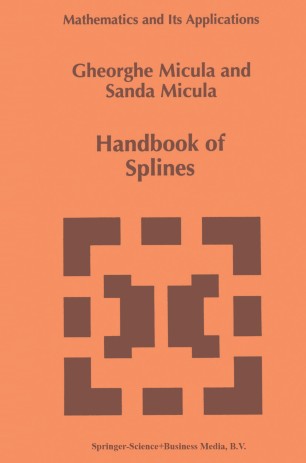 Part of the Mathematics and Its Applications book series (MAIA, volume 462)

The purpose of this book is to give a comprehensive introduction to the theory of spline functions, together with some applications to various fields, emphasizing the significance of the relationship between the general theory and its applications. At the same time, the goal of the book is also to provide new ma­ terial on spline function theory, as well as a fresh look at old results, being written for people interested in research, as well as for those who are interested in applications. The theory of spline functions and their applications is a relatively recent field of applied mathematics. In the last 50 years, spline function theory has undergone a won­ derful development with many new directions appearing during this time. This book has its origins in the wish to adequately describe this development from the notion of 'spline' introduced by 1. J. Schoenberg (1901-1990) in 1946, to the newest recent theories of 'spline wavelets' or 'spline fractals'. Isolated facts about the functions now called 'splines' can be found in the papers of L. Euler, A. Lebesgue, G. Birkhoff, J.